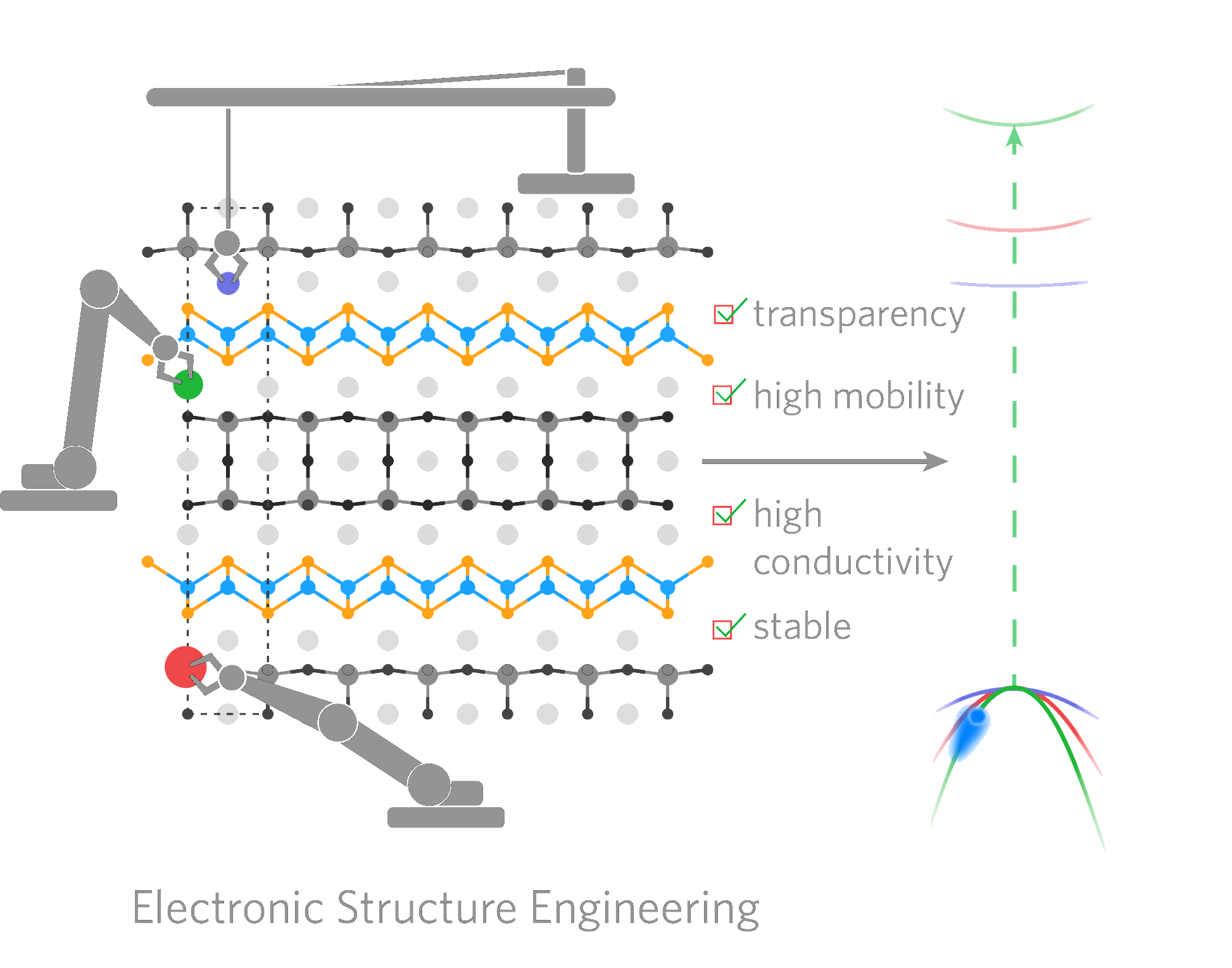 Continuing the search for a high mobility transparent p-type semiconductor to complement the flagship n-type TCOs (e.g. In2O3, SnO2, ZnO or BaSnO3) can be found by exploring more complex materials and utilising established design principles. In this work the layered oxychalcogenide, (Cu2S2)(Sr3Sc2O5), a transparent (Eg > 3.1eV) semiconductor with high reported hole mobilities (~150 cm2 V-1 s-1) was used as a parent compound for this analysis. Using chemical intuition for designer cation choice in the perovskite-like layer (Sr3Sc2O5) we screened 24 variants of this structure type using high throughput density functional theory. From this analysis, our calculations uncovered 9 new thermodynamically stable semiconductors with applications ranging from transparent conductors to photovoltaics. Our predictions have been validated by experimental synthesis carried out by the group of Dr Geoff Hyett (University of Southampton) of a new p-type transparent conductor (TC), with a conductivity superior to all known p-type TCs.

Follow up work by Dr G. Limburn et al. shows the versatility and tunability of these materials focussing on Ba3Sc2-xInxO5Cu2S2 and Ba3In2O5Cu2S2-ySey for photocatalysis applications. 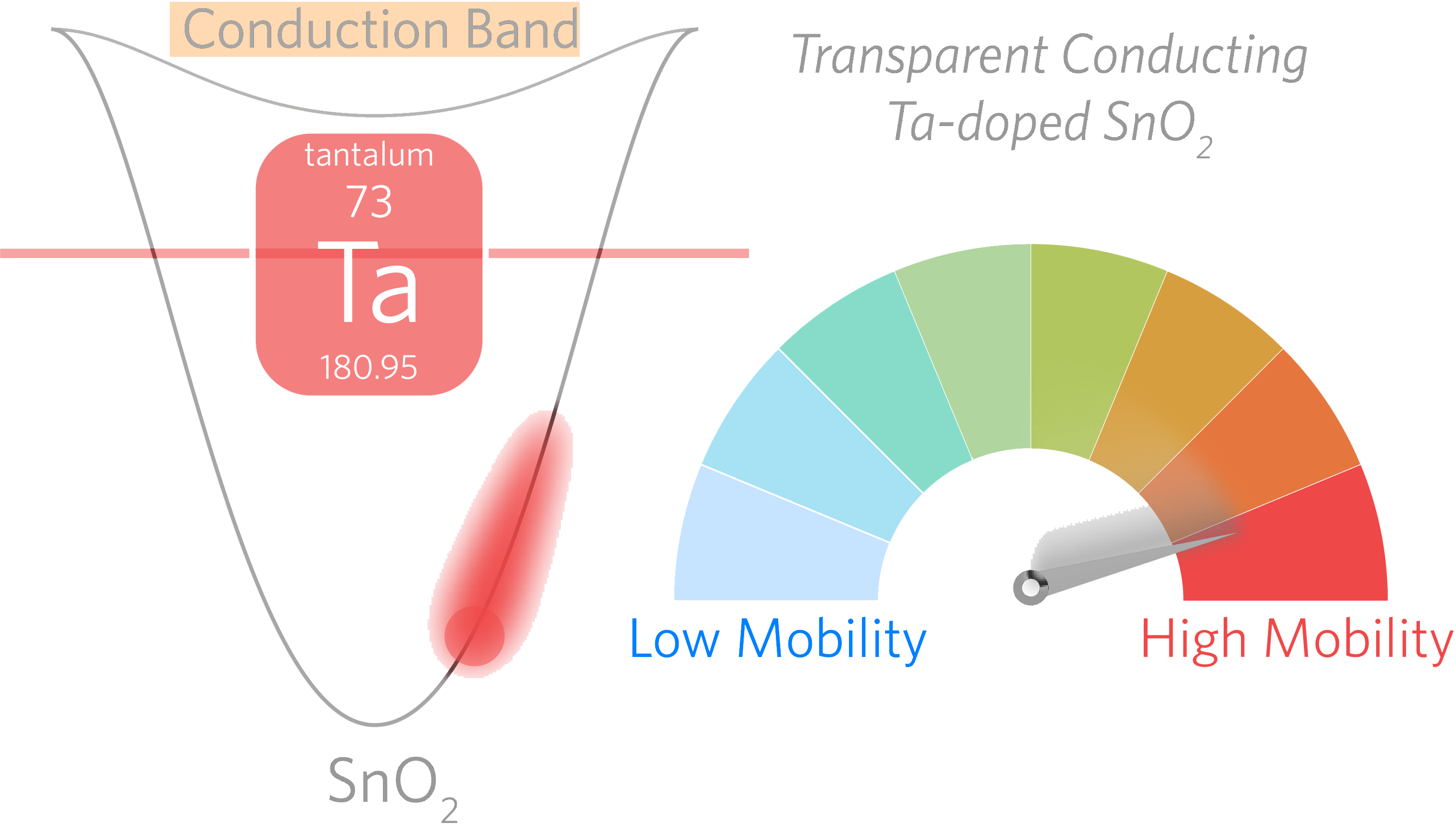 Building on the dopant design principles shown previously in our Mo-doped In2O3 work we show that Ta is the optimum dopant for SnO2. We show that Ta is a low formation energy resonant electron donor with a lack of dopant hybridisation at the conduction band minimum (CBM) unlike in Sb-doped SnO2 (ATO) or F-doped SnO2 (FTO). Thin films of Ta-doped SnO2 (TaTO) were also fabricated using aerosol-assisted chemical vapour deposition (AACVD), which, combined with high resolution photoelectron spectroscopy and semiconductor statistics modelling show an enhanced mobility compared to ATO and FTO, thus proving that the theory holds for other ns0 semiconductors where the CBM is dominated by metal s states. This work was a close collaboration with Prof. Tim Veal and others at the University of Liverpool as well as with scientists at University College London, Diamond Light source and Pilkington NSG Group.

This work was featured on the front cover 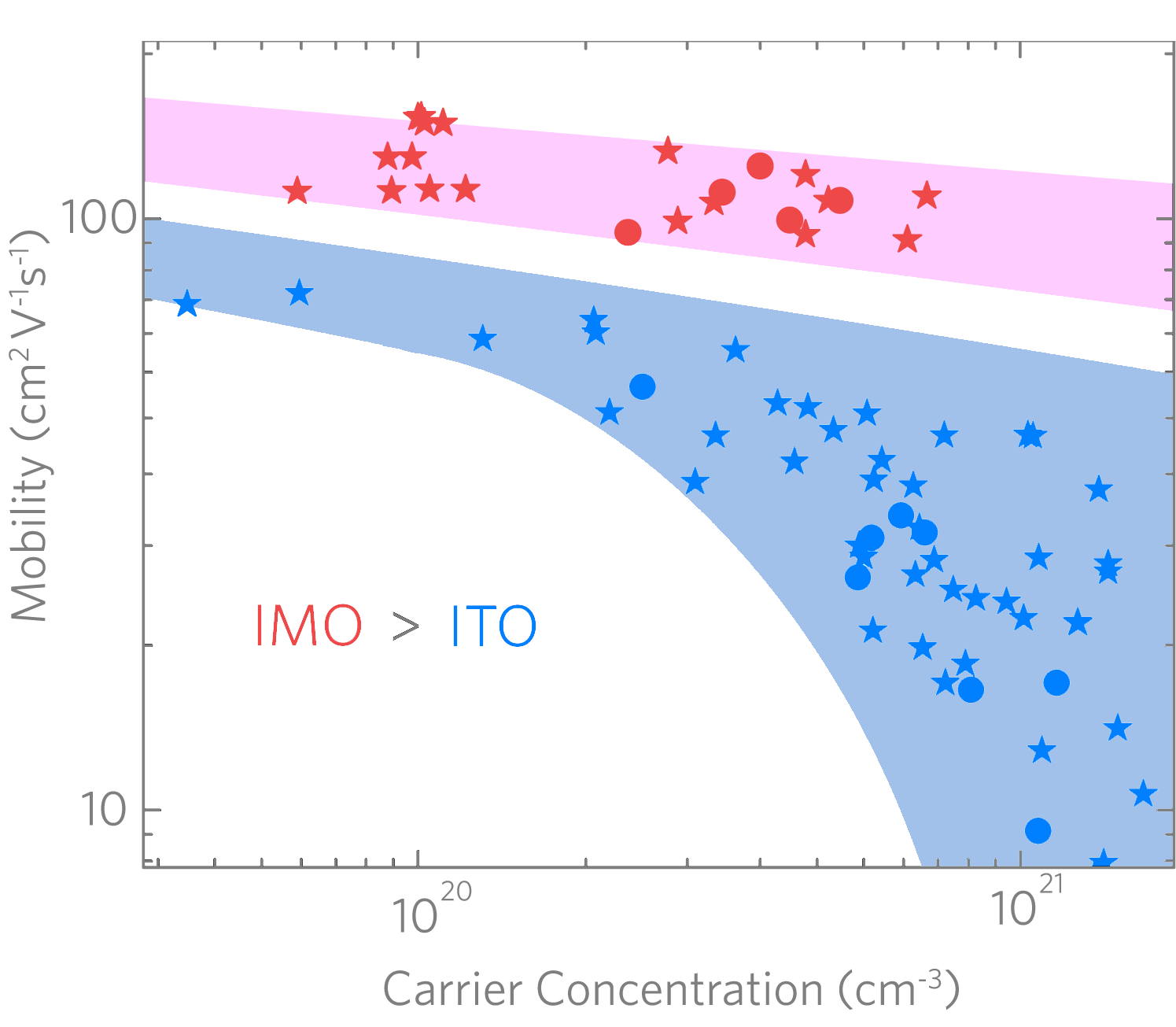 This work focusses on developing higher mobility thin films of In2O3 through dopant design. Mo-doped In2O3 (IMO) thin films consistently displays higher mobilities (and thus conductivity) to the industry standard, Sn-doped In2O3 (ITO). Through a mix of theory and spectroscopic methods we show that this is due to the lack of hybridisation of Mo dopant states with the host conduction band minimum (CMB). Unlike in ITO where this occurs, this means that there is no perturbation of the band curvature and effective mass of electrons in In2O3 at the CBM. This understanding means that IMO thin films can achieve the same performance as ITO thin films at half the thickness resulting in a cheaper electronics and new directions for transparent conductors. This work is primarily in collaboration with Prof. Tim Veal and others at the University of Liverpool as well as with scientists at University College London, Binghamton University, Diamond Light source and Pilkington NSG Group.

Dispelling the Myth of Passivated Codoping in TiO2 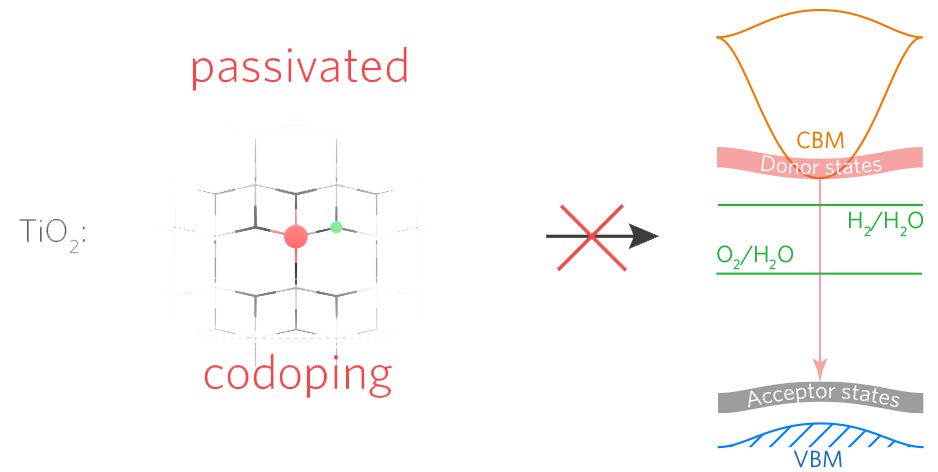 Modifying TiO2 to enhance its visible light activity for photocatalytic performance has become a key research goal for materials scientists in the past two decades. Attempts at achieving this have come from extrinsic doping with acceptors such as nitrogen in order to reduce the band gap and promote visible light absorption. In reality however, nitrogen doping results in localised acceptor states above the valence band maximum and cause detrimental trap states and recombination centres. A popular approach to alleviate this problem was to passivate the acceptor states by codoping with a donor dopant. Using the archetypal codoping pairs of [Nb+N] and [Ta+N]-doped anatase we show that passivated codoping is not achievable in TiO2 using hybrid density functional theory. This work shows indicate that the natural defect chemistry of the host system (in this case n-type anatase TiO2) is dominant, and so concentration parity of dopant types is not achievable under any thermodynamic growth conditions. 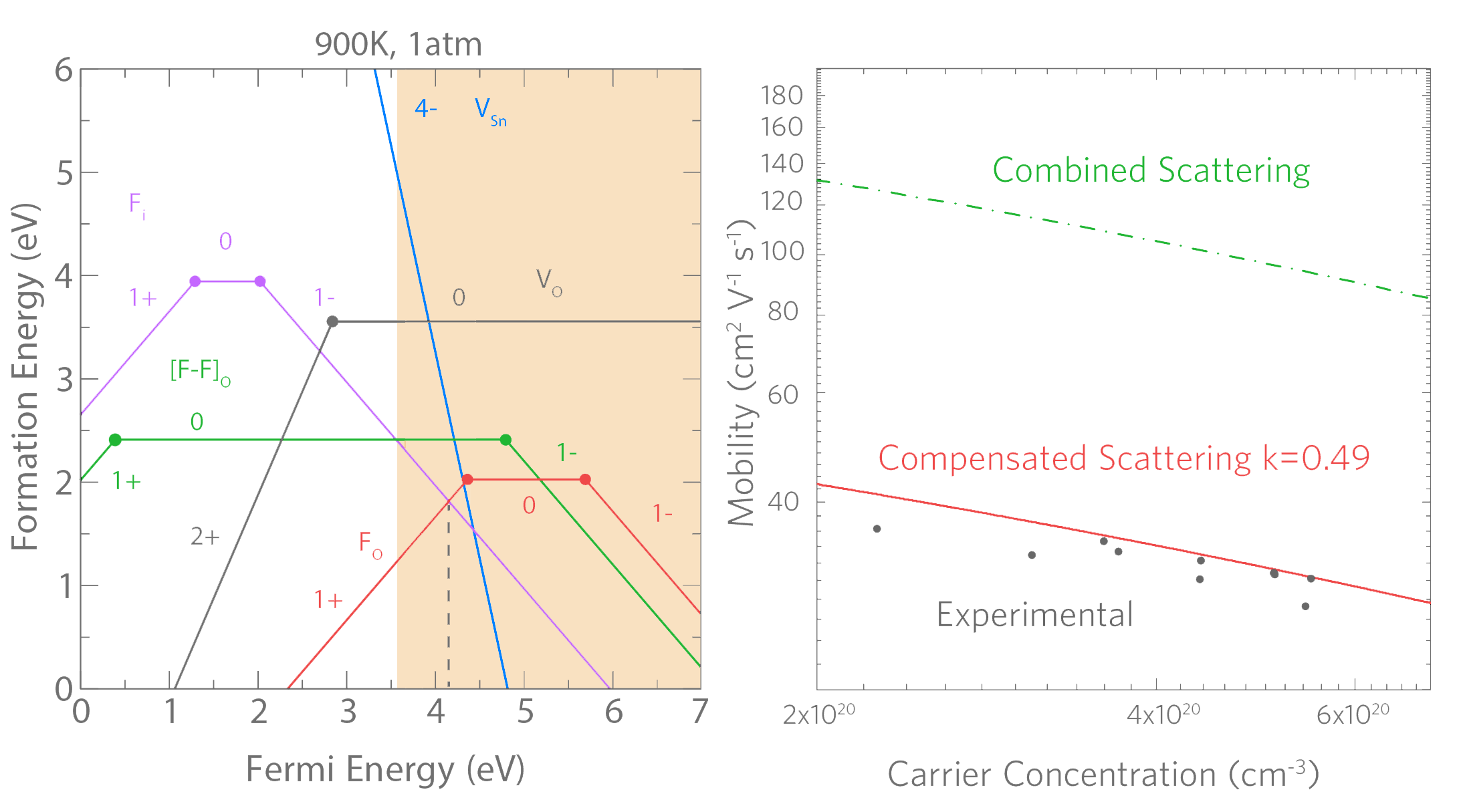 The conductivity and mobility limits in fluorine-doped tin dioxide (FTO) are investigated using a combination of atmospheric pressure chemical vapor deposition (APCVD) and hybrid functional density functional theory (DFT). FTO is a widely used low-emissivity glass coating as well as a transparent conductive layer in photovoltaic cells. Modelling of the transport properties shows that the measured Hall effect mobilities are well below the theoretical ionised impurity scattering limit. Calculation of the dopant and intrinsic defects within FTO show that a self-compensation mechanism occurs whereby interstitial Fluorine (Fi) acts as an acceptor compensating substitutional fluorine (Fo). This work highlights the complex nature of dopants and defect in well characterised metal oxides, providing insight into the possible disadvantages to conventional doping. This work was in collaboration with the group of Prof. Tim Veal (University of Liverpool) and Pilkington NSG group. 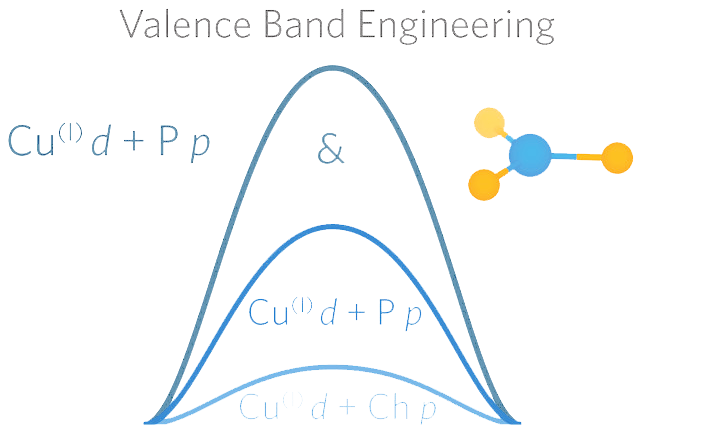 The lack of a high-mobility, high conductivity, p-type dopable transparent conductor has been a stumbling block for the electronics industry for decades. This hinders the development of transparent p-n junctions as well as improving on the efficiency of applications such as photovoltaics. This work furthers the design principles set about in copper-based oxides and chalcogenides extending them to the pnictides, in particular, the family of compounds with the MCuP formula (where M = Mg, Ca, Sr and Ba). Here the combination of Cu 3d and P 3p mixing at the top of the valence band twinned with a trigonal planar coordination gives rise to a highly dispersive valence band maximum (VBM) with a low ionisation potential ideal for high hole mobility dopability. Experimental undoped powders of CaCuP were synthesised as a proof of concept displaying high p-type conductivity. This work helps forward the field of transparent conductors and also shows that CaCuP is a material with the potential for enhancing applications which need a high hole mobility p-type component. This work was incollaboration with the group of Prof. Robert Palgrave (University College London).